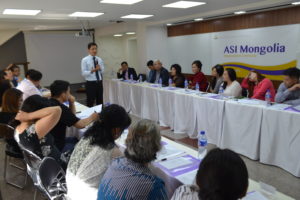 Mongolia Mission (MM) truly believes that in order to spread the gospel message throughout our country, the lay members have an essential role to play regarding God’s Great Commission. Among these lay members, like Nicodemus and Joseph of Arimathea in the Early Church, there’s a peculiar group of men and women that has been called by God to serve with their personal influence and material resources. Their mission field is especially within the more privileged classes of our society that, despite material prosperity, also lacks love, life and salvation like any other human being.

What if we could gather together all this group of Adventist businessmen just to dialogue, listen to them and first of all, make bold plans for God’s Kingdom in Mongolia? That’s exactly what happened on July 20th, 2016 in Ulaanbaatar, capital city of Mongolia. A remarkable inauguration ceremony of the ASI (Adventist-Laymen’s Services & Industries) Mongolia Chapter was held at Flower Hotel main meeting room. Around 30 attendees, consisted most of local businessmen, besides administrators of ASI in Northern Asia Pacific Division (NSD) and MM administrators accepted the special invitation to join the meeting in order to be fully aware about this new and visionary initiative. 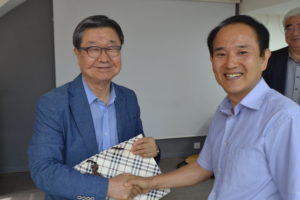 With the motto, “Sharing Christ in the Marketplace”, ASI is committed to supporting the Seventh-day Adventist Church and its various outreach programs; which include health, education, evangelism, community services, family concerns and special projects. Membership in ASI is available to any Seventh-day Adventist church member in good standing, who operates a business, provides a professional service, or operates a supporting ministry and whose organization has been in operation for at least one year. Members shall be engaged in offering services or products which are compatible with Seventh-day Adventist standards.

MM President, Pr. Kim Yo Han, commented his impressions: “When I was suggested from the NSD ASI President and Vice President to start ASI program here, honestly I was doubtful whether it would really work smoothly, but actually, I was totally wrong. God is the One who wants to launch this project. All the participants were very engaged and also showed great passion to know more about it and get involved with ASI programs and activities. I am totally convinced that this is a historical event for MM and I hope through this program God’s kingdom will be expanded in our country.” 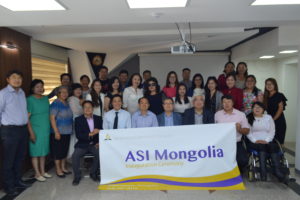 Nowadays, in the corporative world, networking is one of the most important tools for businessmen, and of course it could not be different regarding the Church work. Based on it, the attendants also took the opportunity to develop relationship during a special dinner after the business meeting, totally sponsored by NSD ASI.

“I was quite worried about how many businessmen would attend the inauguration ceremony of ASI Mongolia Chapter. But when we got there, the room was completely crowded. They were so interested and eager to learn more. And I was so moved especially when one of the attendees asked me: ‘Why didn’t you come to Mongolia before? We really need this ministry (ASI) in our country as soon as possible’. I have to say, Praise the Lord!” highlighted Elder Song Jong Hyun, the NSD ASI President.

Ellen G. White says that “to every man is given ‘his work’ (Mark 13:34), the work for which his capabilities adapt him, the work which will result in greatest good to himself and to his fellow men, and in greatest honor to God” (Education, p. 138). The newly launched ASI Mongolia Chapter is really committed to accomplish its work in the name of the Lord and by the power of the Holy Spirit!

There are no upcoming events at this time.